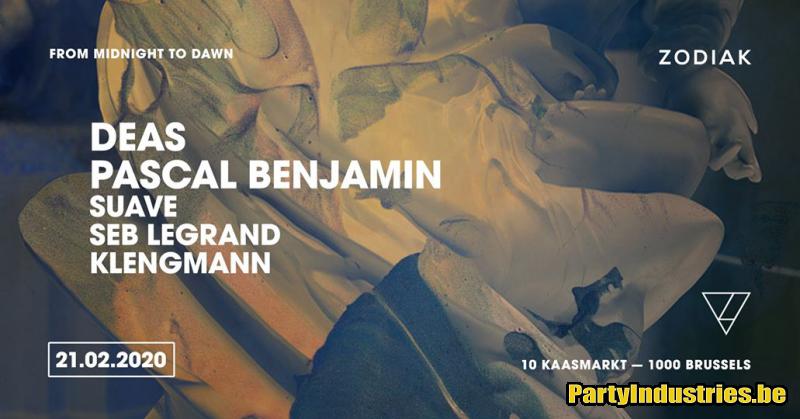 --------------------------------------------------------------------------
▼ ARTISTS
| @[169492713075935:274:Deas] (@[172477999590199:274:Second State], @[229366733934655:274:Planet Rhythm])
https://soundcloud.com/deasdj
DEAS (Karol Mozgawa), based in Cracow/Poland, born in Greece is a music producer and DJ, who is fast becoming one of Techno's most exciting breakthrough artists originating from Eastern Europe. One can recognize his Greek origins and East European upbringing in his music, where enthusiasm and fantasy blends in varying shades of Techno. He believes that music "is never a subject to stereotypes and clichés". This allows him to think freely and create music without boundaries, in which psychedelics and raw, heavy Techno is balanced to perfection with memorable, warm but yet deep melodies.
Not yet 30, he has been mastering his production skills for a decade. During this time he developed an impressive studio where most of his music is recorded live. His hard work is presently coming into a full effect with the releases of a number of labels ranging from Pan-Pot's Second State, through Planet Rhythm, Bush Records, OFF Recordings to Kevin Sanderson's KMS Records. Deas is also a highly sought-after remixer with previous works done for such legends like Carl Cox or Inner City.
His productions received great feedback and are strongly endorsed by Pan-Pot, Ilario Alicante, Kangding Ray, Kevin Sanderson to name just a few. DEAS's music is also featured and supported by such music magazines as Mixmag, Dj Mag, Big Shot Magazine, Decoded Magazine, Magnetic Magazine, Datatransmission and so on.
It is not that often you see such broadly developed artist, like Karol, who is equally skilled in the production studio and behind the decks. He already holds 2 residencies in Poland premier venues, Smolna since 2017 and Prozak 2.0 (since 2012). He has recently appeared among others twice in Berlin and also at the Amsterdam Dance Event. This artist regularly marks his presence at the largest Polish festivals like Open'er or Audioriver.

| @[195194867238471:274:Pascal Benjamin]
https://soundcloud.com/pascal-benjamin
Growing up with the older sounds of House Pascal felt attached to the music at a young age. After years of learning to make music, finding his own sound, connecting with likeminded people, Pascal had his first solo 12" on Welt records by Nima Gorji.
Last year he became part of the respected Dutch label SlapFunk Records. Not long after “From Scratch” EP entered the vinyl charts.
2018 is definitely a good year for Pascal. He got to play next to established artists in the scene and delivered two solo Epʼs on SlapFunk and Botanic Minds. On top of that he already got to play for RealGang Ibiza, VBX, Amsterdam Open Air, SlapFunk, Paradigm and KADER this year.
His music gets driven by endless sequences, trippie hats and tons of under layered sounds.�Being just 22 and with recent music support from no other then SIT, and Petre Inspirescu there is no doubt that we are going to hear more from Pascal in the future.

| @[873636742751282:274:Suave] (@[138536692851305:274:Hollow Lab]/ @[1695838447367749:274:Blind Vision Records])
https://soundcloud.com/suave_be
At the age of six he started to discover classic, jazz and pop. He loved how music made him feel and that hasn’t changed since. After twelve years of musical experiences, he discovered his love for Underground music. That decision started his journey as an Artist and Producer.
Influenced these days by Jazz, Minimal and House gave him the opportunity to look deeper into music.
His productions are mainly groovy and harmonic, he decided to combine those with a sweet touch of minimal to give it a new taste. Although his sets in clubs can be more obscure and punchy...

| @[118693661551308:274:Seb Legrand] (@[155977728073013:274:Non Peut-Être / NPE])
https://soundcloud.com/seb-legrand
A few years after commencing dj'ing at the age of 12, Seb Legrand began playing at many clubs in his native town, also organising parties that gave him the opportunity to play in countries like Spain, Holland, Germany and Croatia to name a few.
Discovering minimal music not far down the line progressed him to play more groovy and funky sessions.
After 5 years on the djing scene he wanted to express something more personal so he advanced to learn music production.
Now living in Brussels making the finest dance music, you can catch his own tracks in his sets and on various labels including 1605, Berlin Aufnahmen, Nell rec, Parallel music ,Yoruba Grooves...

| @[401550383190470:274:Klengmann] (@[386808544678392:274:Blackwallrecord])
https://soundcloud.com/klengmann-bwr
Yannick was born in France in the early 80's and grew up in Geneva. In the late 90's, he got into Chicago house and listened to djs such as David Morales from New York and Carl Cox from UK. He later discovered the "Sound Of Detroit" through the cult anthem "The Aztec Mystic - Knights Of The Jaguar”, produced by Dj Rolando. A child of house music from the ninghties, Yannick owns a large collection of music whose driving force is a constant search for original sounds. His first work came to life in 2000 inspired by video games, and 2 years later he started working on Reason with his cousin during a holiday in the south of France.
In 2009 in Geneva, he launched his first professional musical project, the Teknologik label, with his long-time friends Romano & Vincent. When he then moved to Brussels in 2011, Yannick set up his own label BlackWallRecord with his friend Fabrice Wilkin with an aim to develop the local techno scene. It was around that time that 'Klengmann' the producer first entered the scene, and started sharing his own productions. In 2012 he produced his first album "Like A Puff Of Air" as well as several remixes on Teknologik and BlackWallRecord.
Klengmann’s music takes from a wide array of techno genres from dark or melancholic to happy, while some are more straightforward minimal dance floor tracks with a groovy bass and traditional beats.
--------------------------------------------------------------------------