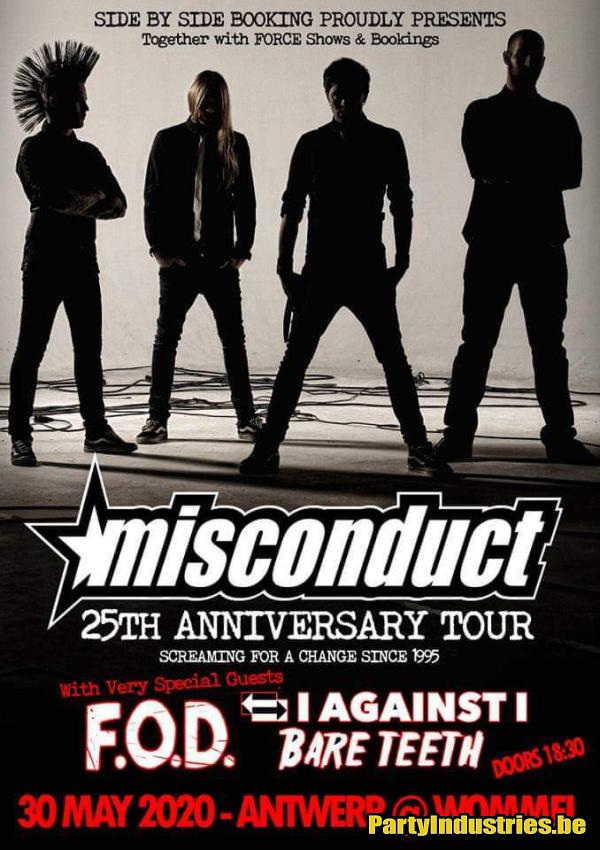 Misconduct / I Against I / FOD / Bare Teeth

MISCONDUCT
Swedish punkrock band MISCONDUCT was formed in the small Swedish town of Kristinehamn and have over the years developed their sound into a unique form of melodic punk rock. Through endless touring the band have managed to build up a very strong and loyal fan-base all around the world. They have toured all over Scandinavia, Europe and North America together with bands like Rise Against, AFI, Dropkick Murphys, Bad Religion, Anti- Flag etc. which have turned the band into a very tight and well-oiled live-machine. Since the release of "One Step Closer " in 2010 and “Blood On Our Hands” in 2013/2014 the band has also shared the stage with big names such as Papa Roach, Bring Me The Horizon, Korn, Turbonegro, Slipknot etc as well as played major festivals alongside bands like Iron Maiden, Aerosmith & Black Sabbath.

I against I
What do you do when you’ve lived out all your dreams with your punk rock band? When you’ve made three records, played hundreds of shows and shared the stage with all of your heroes? Well…just keep going of course!

In 1994 I against I was founded in Dordrecht, a town in The Netherlands close to Rotterdam. Bob, Jasper and Ronald found the best way to get rid of their (teenage) energy was by playing up-tempo, melodic punk rock songs. Before they knew it they were the first European band ever to sign a contract with Brett Gurewitz’s label Epitaph Records. A dream came true, since Epitaph happened to be home to all of their favourite bands.

Bill Stevenson and Stephen Egerton of the Descendents produced I against I’s debut album Headcleaner which became a punk rock classic, featuring songs like Maybe Tomorrow and Nailed to the floor. In the following years two more records saw the light of day, and hundreds of shows took I against I throughout Europe, playing with bands such as Descendents, ALL, Down by Law, Bad Religion, Undeclinable Ambuscade.

Then, in 2008 the curtain appears to drop for I against I.Appears, because in 2017 the band is back as if they’ve never been gone at all. A classic case of “The more things change, the more they stay the same”.

“Of course our lives are totally different now from when we just started” says bass player Bob Hoorweg. “Back then we were kids, now we have kids of our own. And jobs. And mortgages. And station wagons…” Singer/guitarplayer Ronald van Maren adds: “Because our lives have changed so much, we now feel the need to play music as an outlet more than ever before.”

“That’s why we now play with an intensity that wasn’t always there in the past. But what’s really priceless, is the fact that after all these years we are still the best of friends, still searching for that perfect song. That’s worth more to us than any of our past achievements”, says drummer Jasper Blazer.

On that note it is clear that this is not just a trip down memory lane. ”We feel that our best work is yet to come, otherwise we would never have climbed on stage again. We’re really excited to play our new songs live.”

A new album "Small Waves" has been released on October 6th 2018. Does I against I have any other plans? Just keep going of course!

F.O.D.
Since the release of their debut EP 'Dance To This!' in 2011, F.O.D. has become a household name in the Belgian punk rock scene. The band built a steady live reputation with their catchy melodies and vocal harmonies, much in the vein of what their legendary predecessors such as Green Day, Descendents, Lagwagon and Bad Religion have delivered us over the past few decades. Their first video, the instant poppunk anthem 'Carry on' became a classic among the scene.

2013 was a year to remember: F.O.D. released their first full album 'Ontario', which was showered with praise and great reviews all over Europe. 16 songs about life, kids, music, society, all wrapped in F.O.D.'s signature sound that reminds the old timers among us of our favorite nineties' bands and the younger kids that dancing isn't just for girls.

Following the release of 'Ontario', F.O.D. hit most of the Belgian stages, scored a record deal for 'Ontario' in Japan and was even invited to tour Ontario and Quebec in Canada! Their steady rise to punk rock fame did not slow down in 2014, as the band signed with Belgium's renowned punk rock label Funtime Records and released a 7 inch single in February. In the summer, 'Ontario' was re-released as a 12" limited vinyl.

The next big date was September 23rd 2014, when F.O.D. presented their sophomore album 'Tricks of The Trade' on 4 records-labels, all over the world (Belgium, Germany, France, USA, Canada and Japan). The release got celebrated at their own festival FOD-fest

2015 started with a bang: the fabulous and cosy PUNKROCK HOLIDAY-festival in Slovenia, the absolutely amazing GROEZROCK festival, Brackrock in hometown Duffel and a tour in southern-Europe (Spain) got confirmed.

The next step in this story was the release of album number three in 2017(on the same 4 records labels), 'Harvest', a darker album, written in the slipstream of a divorce. The melodies are still there, more soaring than ever, but the overall mood is a bit less happy, the music a bit more aggressive. Again the band released the album at their own festival. 2017 seems unstoppable: in a short period of time F.O.D. got confirmed to play mainstage at GROEZROCK, KNRD-fest, Jera On Air and supporting SUM 41 at the Ancienne Belgique in March!

The band also announces to do a Japan-Tour in April what happens to become a highlight in their carreer! With loads of other nice shows/fests happening, it was a very promising year!

2018 was a continuation of the chosen path: after playing some shows in the UK there were amazing supports for big heroes such as Satanic Surfers, Lagwagon, Authority Zero, Frenzal Rhomb, No Fun At All, ...

Bare Teeth
Hailing from Lille, in the cold and rainy northern France, Bare Teeth is a band that doesn't care much about labelling its music. Of course, they sound like a punk rock/hardcore blend and claim inflence from bands such as A Wilhelm Scream and Propagandhi. However, the four members also bring some trash metal riffs into the mix and don't repudiate some typically pop melodies, coming from their respective backgrounds in different projects.

After a 3-track demo in 2015, Bare Teeth has released its debut EP "First The Town, Then The World", mixed by Trevor Reilly (A Wilhelm Scream - USA) and featuring guest vocals by Steve Rawles (Belvedere, This Is A Standoff - Canada) in May 2017. Since then, the band has already successfully toured Europe (France, Belgium, Germany, Netherlands, UK, Italy) as well as once in Japan and twice in China in 2018. Bare Teeth also had the opportunity to open for some well-known acts such as A Wilhelm Scream, Belvedere, Satanic Surfers, Tagada Jones, SNFU, Such Gold and Not Scientists. The town has already been conquered, let's have the world!